In November the Fay Ranches Community Foundation donated to the Powder River 4-H in honor of the late Victor Rue. Victor, the father of Fay Ranches agent, Kebi Smith, was involved in his local 4H program from a young age. He raised his family for many years in Powder River County and was a proud member of the community. Even after a move to McLeod he returned almost every year for branding and family gatherings.  Kebi is a fourth-generation Montanan and cattle rancher who also enjoys getting involved in the agricultural aspects of the community. Kebi’s father promoted her love of the outdoors, and she has continued that tradition with her own family.

Kebi stated, “Vic Rue was so proud of his roots in Powder River County and Broadus. His family (the Rue and Scofield families) homesteaded on the Little Powder River near Biddle, Montana in the late 1800’s, where they were deeply involved in the rural, agricultural, and political communities. In the 1950’s, Lloyd Rue (Kebi’s grandfather) was instrumental in bringing a large circus tent to the Fair when a building didn’t exist for the event. Vic participated in the 4-H program during his youth in Powder River County as did his grandchildren.  He would be greatly honored knowing that the Fay Ranches Community Foundation made this donation to the 4-H program on his behalf knowing that it benefits the youth in the area. And, on behalf of Vic Rue and his family, we are grateful and thankful for the gift made by FRCF. 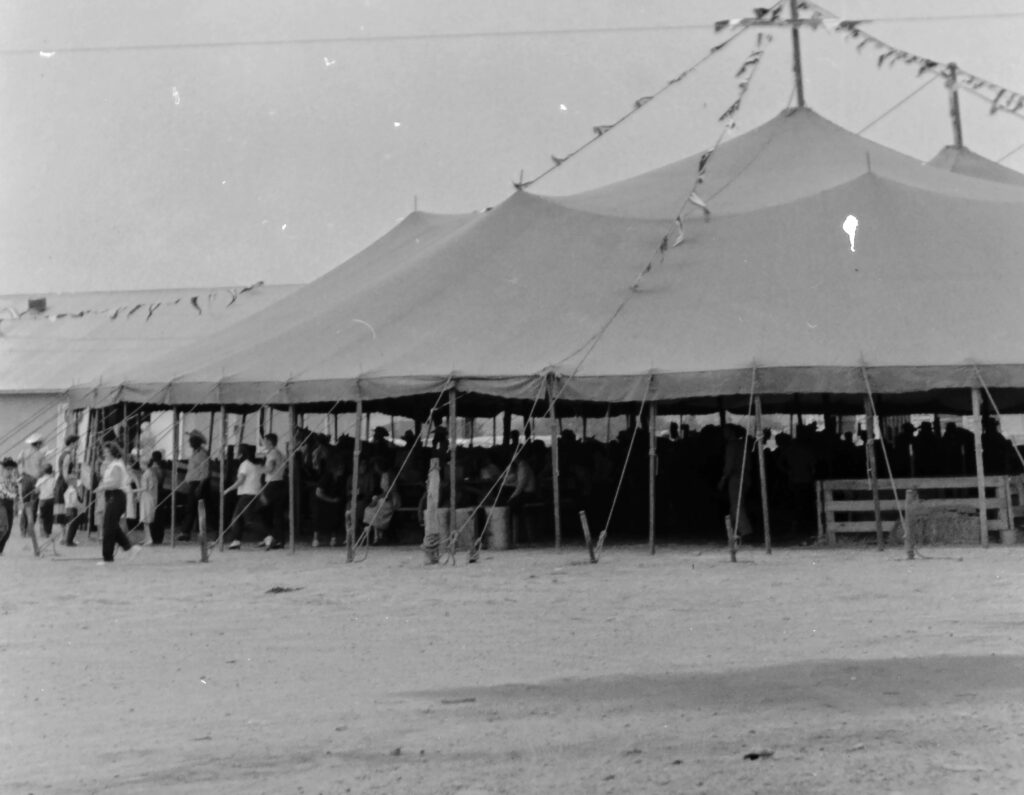 We are honored to assist the Powder River 4H and the youth that participate in their programs. The Fay Ranches Community Foundation was founded to combat the lack of resources and opportunities indicative of small towns across the country. The Fay Ranches Community Foundation supports these efforts because we envision a future where families choose to live in rural America, where they have access to quality education, healthcare, and growth prospects. We are dedicated to helping rural America by focusing on improving the quality of their healthcare, education, and youth resources. By focusing on these areas, we can increase the well-being of residents and the economic prosperity of towns. Providing sustainable resources to rural America has a significant impact on their communities as well as a domino effect on the rest of the country.  We must ensure that residents have the tools and resources they need to build a better life for themselves and their families thereby creating a legacy for their communities and this nation. Providing resources and opportunities for these communities is our passion and mission. We invite everyone to join us in looking toward the future of rural America.  For more information on how you can contribute to the cause, visit www.faycf.org. 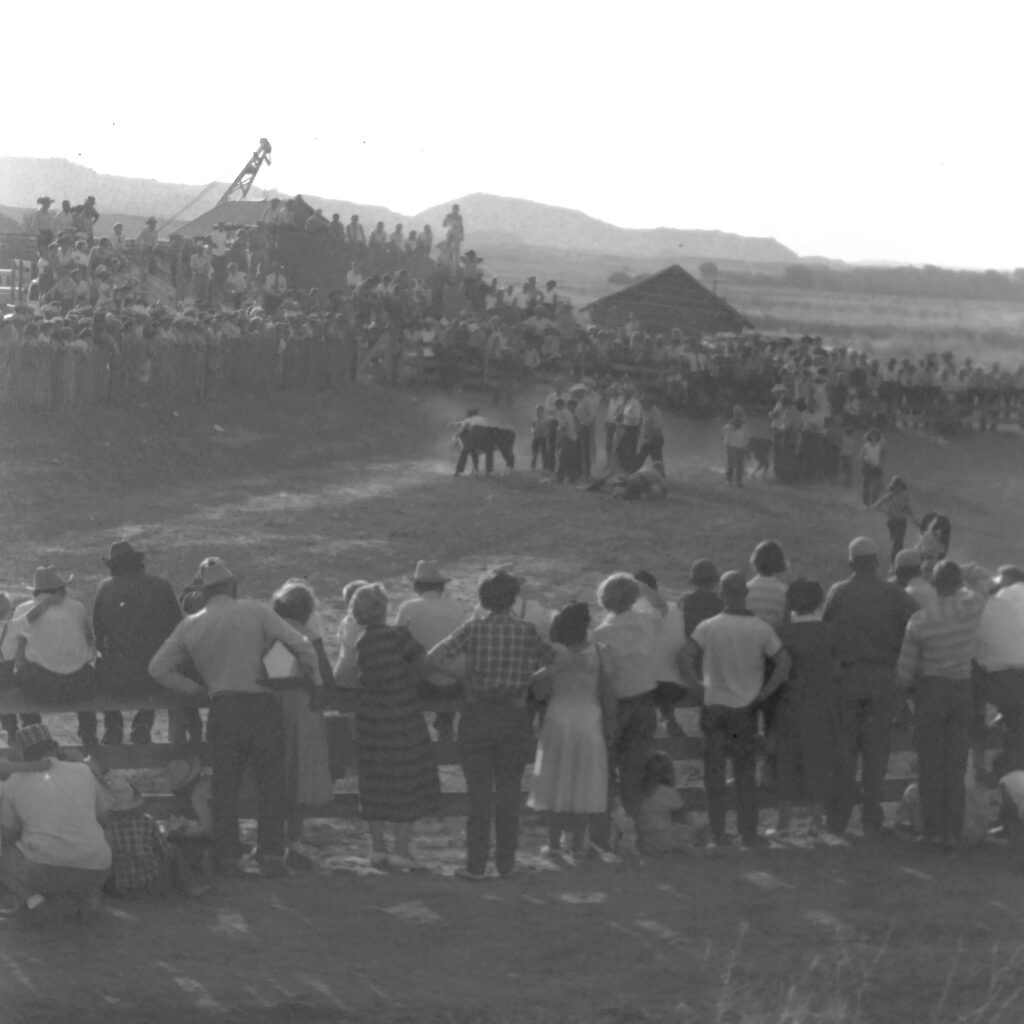 Bozeman, MT:  Last week, thousands of pounds of fresh beef, pork, goat, and lamb were donated to 33 food banks and community kitchens throughout central Oregon. The Fay Ranches Community Foundation in conjunction with the Hicks Team of Fay Ranches Land Brokerage partnered to purchase animals through the 4-H and FFA livestock auctions. The animals purchased went to the 1017 Project that supports communities facing food insecurity by providing high-quality protein.

According to the USDA, more than 38 million people, including 12 million children, in the United States face food insecurities. Recovery from the pandemic’s economic disruption is expected to take three to five years. Fresh food donations have plummeted across the country leaving many families hungry and without alternatives. Food banks in rural America were already desperate for donations, and without food to distribute, some were forced to close their doors.

Jerry Hicks said, “We feel strongly about supporting both the Fay Ranches Community Foundation and the 1017 Project. First, the 4-H and FFA livestock market animal sale; nothing speaks louder to the farm and ranch family network and community than being able to support these young future farmers and ranchers by buying their market animals. It’s very rewarding having each of these kids come up to you during and after the market sale and say, ‘thank you for purchasing my animal.’ The second phase of this effort is then donating the high-quality meat back to the 1017 Project. Since 2014, the 1017 project has developed an amazing distribution network that supplies meat (mostly hamburger) to over 40 food banks, kitchens, and churches from Texas to Oregon and has supplied over 300,000 pounds of meat to these wonderful groups that are putting hungry families first. Our leadership this year at the market animal sales led to participation from numerous other donors. WE ALL WIN!”

Executive Director, Susan Ferrin, said “the Foundation aspires to make lasting change in these vital rural communities. To make a generational impact we need to address the underlying challenges of increasingly limited resources. Working with the Hicks family and programs like the 1017 Project we can begin to see how with passion and dedication, lives can be changed and transformed by all of us coming together.”

About The Fay Ranches Community Foundation:

The Fay Ranches Community Foundation was founded to combat the lack of resources and opportunities in small towns across the country. They are dedicated to helping rural America by focusing on improving the quality of healthcare, education, and youth resources. By focusing on these areas, they strive to increase the well-being of residents and the economic prosperity of towns. Providing sustainable resources to rural America has a significant impact on the communities as well as a domino effect on the rest of the country. The Foundation is driven to make certain residents have the tools and means they need to build a better life for themselves and their families whereby creating a legacy for their hometown and this nation.

The Fay Ranches Community Foundation envisions a future where families choose to live in rural America, where they have access to quality education, healthcare, and growth prospects. Providing resources and opportunities for these communities will truly change lives. For more information on how you can contribute to the cause, visit www.faycf.org.

For almost 50 years, Norman Rockwell’s Saturday Evening Post cover illustrations offered a winsome glimpse into a wonderfully glorified version of small-town America. Rockwell’s depic­tions of endearing scenes reflected simpler times when a strong sense of community and work ethic was tangible, neighbors helped each other, and few felt the need to lock the front door to their homes. Back then, these images resonated with millions of Americans. After all, when Rockwell created his first cover for the Post in 1916, more than half of the US population lived in rural areas, according to the Census Bureau.

My, how things have changed.

Today, less than 14 percent of Americans reside in rural communities. Small towns themselves are enduring “a plethora of problems related to pov­erty, crime, health, and education,” wrote Jayme Walters in a 2019 study published in the Human Service Organizations: Management, Leadership & Governance Journal.

The survival of rural America has been a hot topic over the past decade, one that was infamously debated in 2019 by two influential New York Times opinion columnists, Paul Krugman and David Brooks. It has subsequently been covered in some shape or form by just about every US news outlet, and many from overseas.

“The abandoned main streets show the wear and tear of an economy that has shifted away from rural people and of public policy that has forgot­ten to pay attention,” wrote Katherine Cramer in a 2017 story for The Guardian titled “The Great American Fallout.”

This abandonment has haunted Greg Fay for decades. More than 30 years ago, he launched Fay Ranches, in Bozeman, Montana. While it’s widely recognized that small towns are suffering, he points out that there are surprisingly few nonprof­its and resources specifically focused to assist them.

“A few years after I founded Fay Ranches, I added ‘Fay Small Community Fund’ to the website’s navigation,” he says. “But I soon realized that nothing would happen until Fay Ranches reached a high level of success,” he says.

Today, with a solid team and decades of experience under his belt, Fay is finally in the position to bring this idea to fruition. At the National Finals Rodeo in Las Vegas late last year, he announced the launch of the Fay Ranches Community Foundation. The organization’s mission? To support America’s rural communities by developing opportunities that focus on youth, education, and health initiatives.

“People understand that quality education, healthcare, and opportunities for kids to grow and return to their hometowns are vital to the success and sustainability of rural communities. These three areas are where we feel we can be most effec­tive,” Fay says. He has always been passionate about conservation and outdoor recreation, and since his brokerage’s inception in 1992, he has recognized the importance of rural communities as the back­bone of his business model.

Fay admits that Fay Ranches was built upon a “light-bulb moment to help keep ranches working instead of subdi­viding them,” he says. “To me, the key to the conservation of private land is keep­ing it in agriculture, keeping it working sustainably.” The hamlets nearby are often rich in small-town charm, which is a critical part of the allure that moti­vates his clients. But over the years, Fay has witnessed the undoing of many once thriving communities.

What many may not realize is that these small towns are more than just picturesque landscapes sprinkled with barns and hayfields. They are essential to our economy, food system, and sense of community.

According to a report from the Center for American Progress, rural landscapes make up 97 percent of the landmass in the US. They generate more than 10 percent of the coun­try’s gross domestic product and are “crucial sources of water, food, energy, and recreation for all Americans … accounting for a large portion of the country’s vital natural resources.”

Since the onset of the COVID-19 pandemic, many Americans have tran­sitioned to working remotely. This has not only heightened the demand for small-town living, but it has increased the cost of living. For those migrating from urban centers, the desire to sim­plify and raise families in supportive rural communities trumps the conve­nience and larger paychecks that big cities typically offer.

“We’re trying to provide an opportunity for folks to give back to the communi­ties that they are part of,” Fay says. “Whether you just bought a farm or ranch and are looking to get involved in your new community or just sold your property and are looking to leave a legacy, the foun­dation provides a conduit to make a positive impact. Those who have spent time hunting, fishing, and recreating outdoors under­stand how vital these communities are to the fabric of America and why it’s essential that they’re healthy and sustainable. Our philanthropic clients now have an opportunity to support rural America.”

With an experienced development director and board in place — along with Fay Ranches’ offices through­out the Lower 48 — the next step is to evaluate and commit to projects in the rural towns that need it most.

“When you invest in land in rural America, the investment can be impacted by the health and vitality of the community and vice versa,” Fay says. “There are no limits to what we can do with the foundation. The bigger it gets, the more people it benefits and the more generational impact it will have. We could do so much good.” 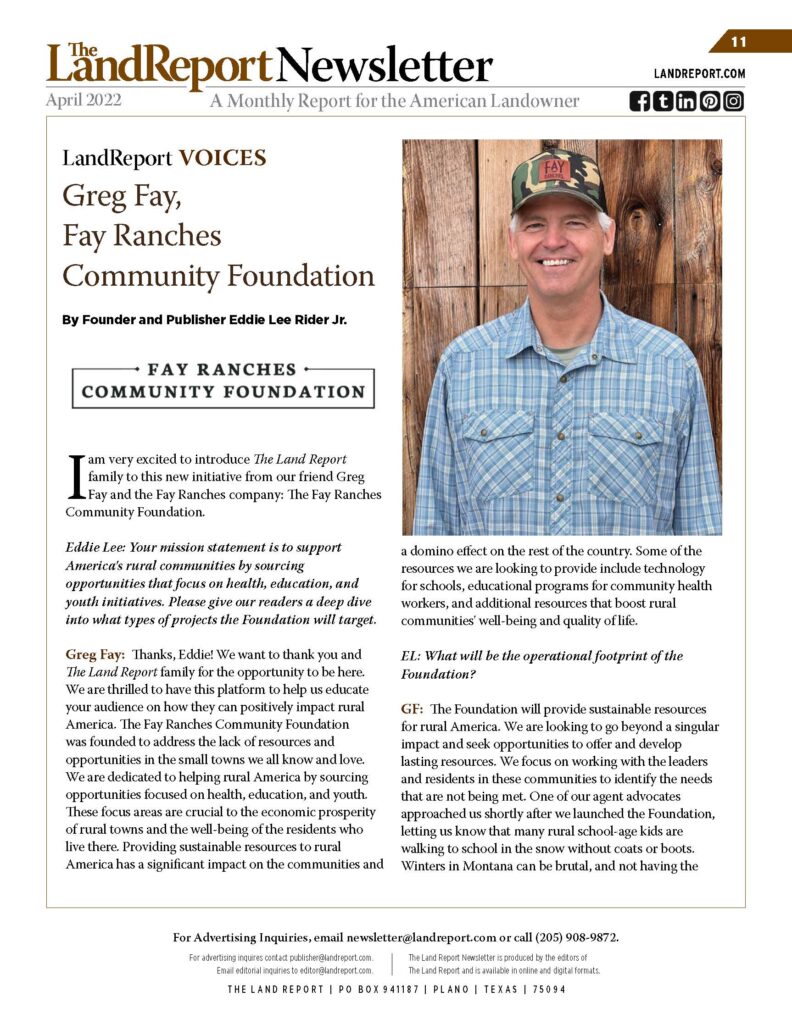 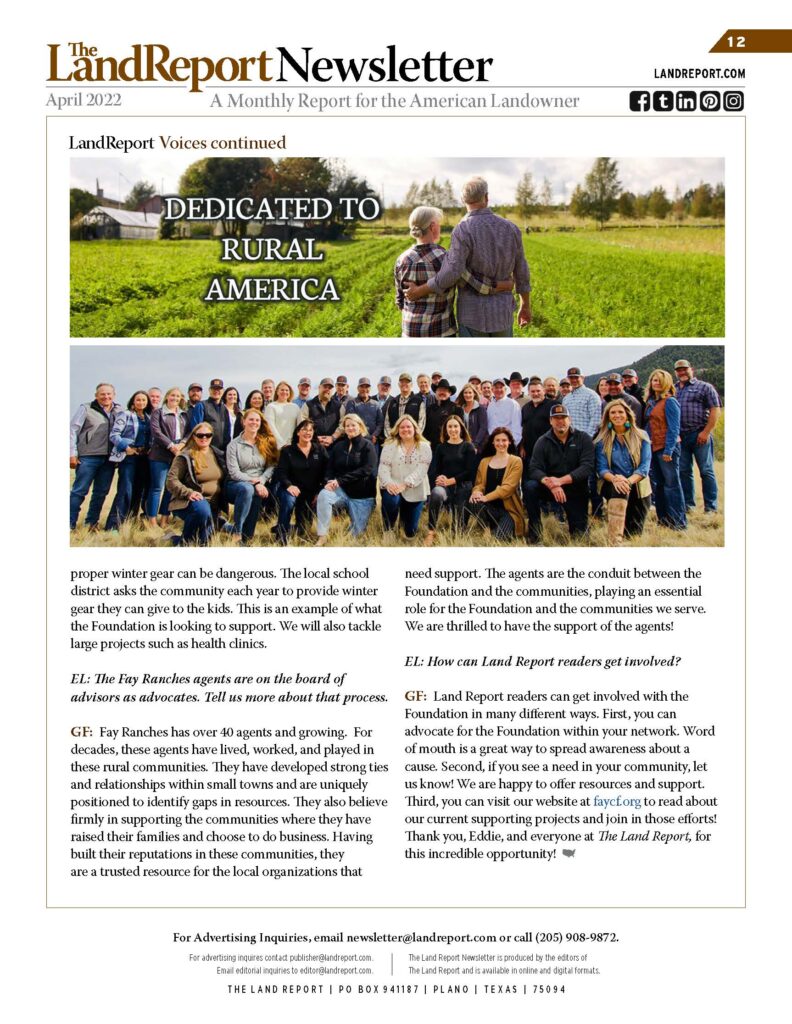 Greg Fay announces the launch of his 30-year vision, the Fay Ranches Community Foundation, at the National Finals Rodeo in Las Vegas. This foundation’s mission is to support America’s rural communities by sourcing opportunities that focus on youth, education, and health initiatives. We are passionate about supporting rural communities because that is where we live, work, and play every day. These communities are strong and provide resources for the rest of the country. The Fay Ranches Community Foundation provides technology, educational resources, and financial assistance to support rural America.